Most Fascinating Female Actresses Of The Month – March 2013 Edition

Vote now for who you think should be the Most Fascinating Female Actress of the month for March 2013! If you feel that you or someone you know deserves to be a featured as one of the Most Fascinating Female Actresses of the month then let our talent coordinator know by emailing eileen@starcentralmag.com and we’ll get back to you as soon as we can! Please keep it in mind that any person who leaves unpleasant and unnecessarily rude or derogative comments will be removed and banned from this site permanently. Let’s just keep this voting poll fair and fun! 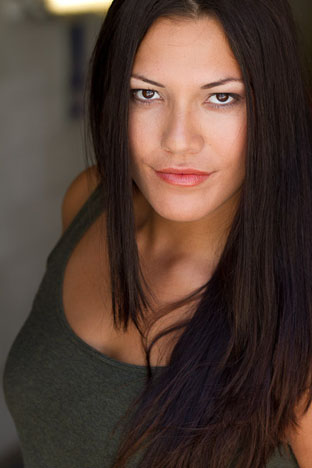 With over 6 years in acting, entertaining, dance, singing and modelling experience, Tracey has been cast in several feature films, short films, modelling shoots, music videos, commercials, and independent projects for screen, stage and web productions. After graduating from the Participate Film Academy in 2008, she then played the role of ‘Trixie’ – one of the supporting leads of ‘Green Fire Envy’ where she starred alongside Ashleigh Cummings from the movie “Tomorrow When the War Began.” The film premiered at the Hoyts Entertainment Quarter. In 2011 she graduated from TAFTA (The Australian Film and Television Academy) where she was mentored by John Orcsik & Tony Bonner. She then travelled to Los Angeles to complete full time, intense acting and writing studies with Andy McPhee and several other American teachers whilst strengthening her networking opportunities. Her most recent accomplishments include being cast as the lead in a feature length action/thriller ‘Blood Debt’ as the heroine ‘Charlotte’, she was also cast in a pre-production for a 10 episode web-series ‘Atomic Kingdom’ as the recurring ethereal Goddess “Ereshkigal”. She will be commencing work on several professional photography sessions between February and April for her completed work on feature film ‘Torn Devotion’ which is due to premiere Australia wide in April 2013. She also recently released an online feature film called ‘Dead Moon Circus – Part 1’ where she played the character ‘Cere Cere’. So far it has generated over 40,000 worldwide views from passionate fans who are now eagerly awaiting the release of ‘Dead Moon Circus – Part 2’ in March of 2013. When not performing or studying she produces TVC’s and content for film and web, writes music and scripts, spends her time in prayer or meditation, visits family, attends networking events and mentors people to build healthy finances, bodies and dreams via her business with Neways International. 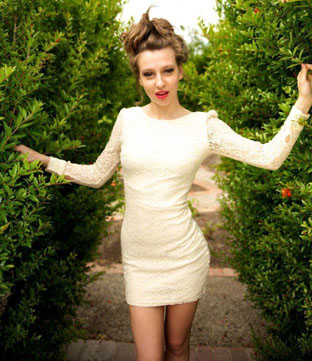 Even at just 5 years old, Alicia has already appeared in over a dozen TVC’s and TV series. Her strong passion for the industry has lead her to study screen acting in Hollywood, LA USA, Australia as well as in Orlando, FL USA. For over 12 years she has been pursuing acting with passion, commitment and a persevering attitude with a goal to make it her career. She was featured in Stan Walkers’ video clip ‘Unbroken’, starred in an episode of ABC3’s Prank Patrol and is currently filming a new TV series and feature film. 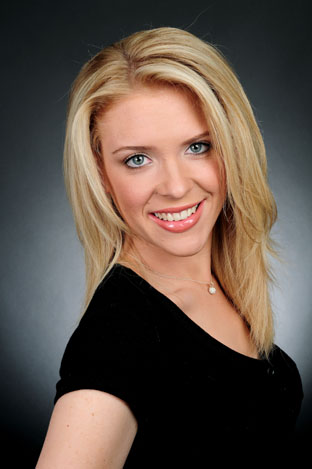 Stephanie Louise May is a 22 year old actress who is currently on her 8th year of being in film and TV. She has been selected for a full time acting course this year; however, she is still remaining active on the field and already has a few features lined up. Her greatest achievement so far is being in a feature called “The Navigator” which is a thriller drama and is due to be released in the cinemas later this year. She’s also had some speaking roles on TV shows such as Deadly Women, Eerie Encounters as well as the tele-movie called Panic At Rock Island. She is currently rostered in a big budget feature film called “The Second Coming”. 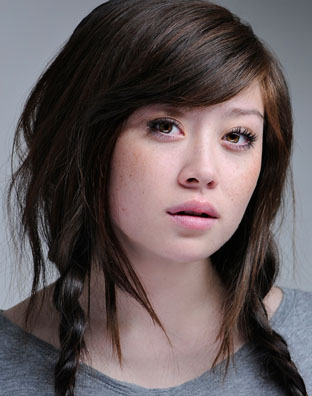 Fiona Rene has been acting since she was 7 years old. As a child, Fiona already told her parents that she was going to graduate high school early, go to college for theatre and become a full time actress – there was no other route for her! Although her passion began in the theatre, over the years, she has actually gained delight in a variety of professional experiences by acting in TV, Commercials, Theatre Productions, Music Videos as well as Short Films and Feature Films. She has appeared in Grease, Bob the Builder LIVE, Tartuffe, The Breakdance Kid and Snatch n’ Grab. Fiona also has spent the past 5 years working and training other actors in scaring people at Haunted Houses all over the world. She has worked as a presenter, interviewer and voice over artist for T.V, corporate videos, and Web based companies such as Durex, Lynx, Pitney Bowes and BugFinders. She has a solid commitment to entertain and educate through her professional, fun, emotional and adventurous performances and she also enjoys Live Children’s Entertainment, traveling and singing.

Vote for who you think should be the “Most Promising Female Actress ” in the poll below! The winner will appear in our website and will be in line to be featured in our magazine. The poll closes on the 28th of February, 2013 at 12:40am AEST and you are eligible to vote only once per day (after you’ve voted, 24 hours must pass after the time you voted, for you to be able to see the voting form and vote again the next day). Please note that voting is also restricted to just ONE vote per IP address. Vote NOW and make your voice heard! 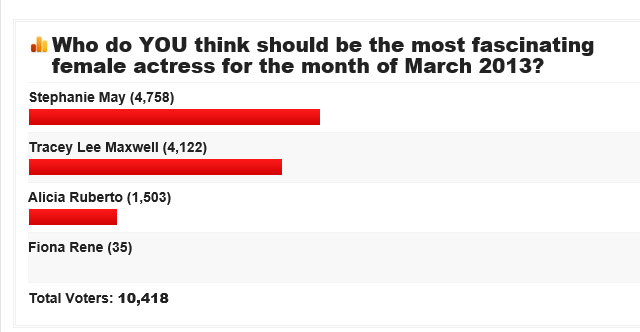